Multi Language & Localization to the Next Level

Approximately 14% to 15% of adults in the U.S. and Canada speak something other than English or French at home. With that in mind, it is only right that we provide sophisticated language and localization tools to support all the people in a community.

Deploy in one or multiple languages. Do this with real-time, machine-based, or human translated content. Create content in different languages, or let the user select a language once they arrive.

Visitors, volunteers, and staff can use forms and tools deployed in different languages and dialects. Languages can be determined by role or permission, or the user can switch between languages from a form or module, or the user can see more than one language on the same tool at the same time.

The CommunityOS™ platform offers the extraordinary ability to build entire sets of data entry and search tools, as examples, from translated content--automatically. Start with a form in English, create the translations, and the system builds the forms in one or many other languages for you.

Because language support can be constructed from the data table up, and because the system is built on the international character set, API data exchanges and our API Builder provide support for multi-lingual content. Authorized users can combine languages within a single API endpoint, or restrict a data exchange to a specific language.

So join us on the CommunityOS platform from Visionlink! Let's embrace the diversity of language that defines our communities. 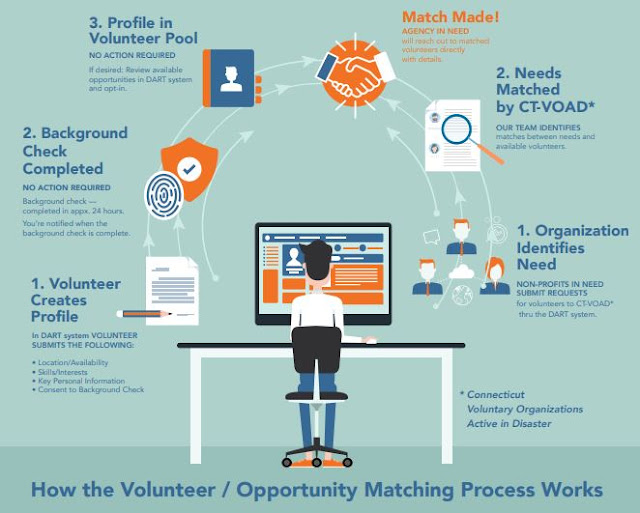 The Connecticut State VOAD (Voluntary Organizations Active in Disasters), has created a great graphic to explain how the volunteer management solution works. Volunteers can sign up and register their skills and availabilities. Lead agency staff can then post volunteer needs, search for volunteers that match the opportunities, and assign volunteers to various opportunities..  Visionlink is proud to provide this volunteer management solution and honored to help empower the time and talents of Connecticut's dedicated volunteers.

Visionlink is pleased to support the County of Ventura in their recent launch of the Ventura County Pandemic Rental Assistance Program. This program is aimed at providing temporary rental assistance for Ventura County residents who owe past-due rent because of a hardship due to COVID-19. Priority is being given to eligible applicants with an annual household income of less than 50% area median income, followed by 80% AMI. The application process opened online on June 17, 2020 at www.ventura.org/rent . The application deadline is July 1, 2020, including information from each applicant’s landlord. While the funding may not fully cover monthly rent, it will assist in reducing the amounts owed for rent. County officials anticipate a great need for the program.  You can learn more about the program here . Visionlink’s Community OS platform is providing the tenant and landlord application solution and the eligibility review technology for this program. We congratulate the County of Ventura

Thousands of COVID-19 volunteers and donated essential supplies are matched with states’ needs through an innovative pro bono tech and volunteer partnership BOULDER, CO, April 9, 2020 – Americans are no stranger to disaster. A hallmark of U.S. culture is the immediate outpouring of offers from volunteers and companies urgently wanting to help those stricken by misfortune. But, the new coronavirus pandemic has brought out another aspect of American society— the tenacity and ingenuity to work around obstacles to helping that until this point in our lifetime were unseen, namely that of social distancing. In the face of the escalating COVID-19 pandemic, National Voluntary Agencies Active in Disaster (NVOAD), Visionlink’s Disaster Technologies Division and Sterling Volunteers are partnering in a public-private pro bono effort to help state governments and non-profit agencies mobilize the desire of Americans to provide help from a safe distance. The partners do this by